Last week I felt like Alexander on Tuesday and the terrible no good very bad day.  It wasn’t anything major, but just a few little things that seemed to add up on that day.  In the grand scheme, nothing was “wrong”, but we’re all entitled a little pity party day from time to time.  Mine are rare, but this last couple of weeks just caught up to me….

Fighting a cold for 10ish days, students turning in sub-par work, grading 55 resumes-twice-both times including extensive edits so my students are equipped with a resume they could really use, 55 cover letters, 41 tests-including short answer response, typing tests and a few daily grades in between. Add onto that trying to stay active and hit Pure Barre classes a few times a week, volunteer commitments and feeling a little overwhelmed by my schedule and realizing the valet must have “borrowed” my sunglasses Sunday night when I valeted my car, since they are no longer in my car.  Having my stuff stolen is a sensitive topic for me, so the week just kind of snowballed.

Along the way of the week, I was working on my Discipleship Group study book and came to the fruit of the Spirit…love, joy, peace, patience, kindness, faithfulness, gentleness and self-control. All of which were on full display.  On opposite day. I felt like I had no free time, no creative time, no “me” time, but before I camped out to grade at my kitchen table on Wednesday night, I had a snack and made myself a quick reminder…the thing I need the most every morning is Jesus… 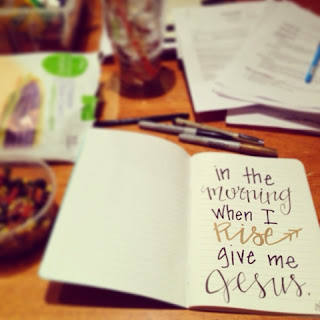 What is most frustrating at times to me is I put myself in the bind myself.  I committed to things that take up time, time I don’t mind spending, but sometimes I just want some ME time. One of my goals for 2015 was to be intentional with my time, and isn’t it just something like this that will lead you to thinking you’ve already failed the goals/resolutions/intentions while January is ticking away feeling like a hamster on a wheel and just passing myself coming and going with my bag loaded down with Kleenex for a runny nose, cough drops and a LePen + papers for grading whenever I had a few free minutes.

A couple of times during the week I thought…

But, Friday came, and my sweet school bestie stopped by with a fun prize.  She is so crafty, and made this cute catch all for me. I love a monogram and this was put to use immediately to catch my daily stack at the end of the day and remind me, not only does a pretty dish from a sweet friend with my monogram catch things at the end of the day, but Jesus, the same one who’s there waiting for me when I rise awaits me at the end of the day.  And, all the times in between, He meets me there, sometimes that comes in the form of a kind gesture from a friend. I hope I am that friend to someone on the days they need it most. 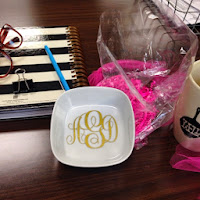 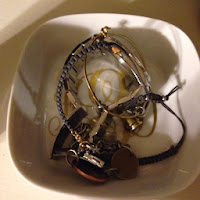 After a long Saturday for District competition with club I sponsor, I got to sleep in on Sunday. Not only did I sleep in, but I got to lay in the bed after I did wake up.  I finally got out of bed around 9:30, mainly because I was hungry.  It was a good morning to be lazy. 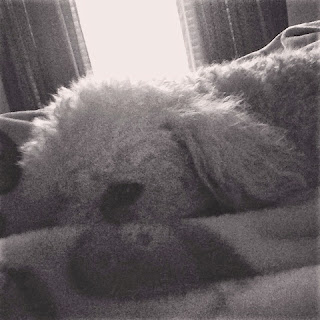 I put on my favorite green fleece jacket to make a run to the donut drive thru and while I was out realized I should go ahead and get gas.  In my leopard pj pants that were safe in the drive thru but  very “fancy” at the gas pump. Rewearing an outfit from the school week to to church was easy/lazy {& comfy} choice. Just changed out for tank vs long sleeves under my jacket because it was warmer! And a ponytail because, well, be honest… we all know clean hair doesn’t go in a ponytail. Also, kind of how I feel about the Super Bowl: neutral. But, if I had to pick…Seattle. 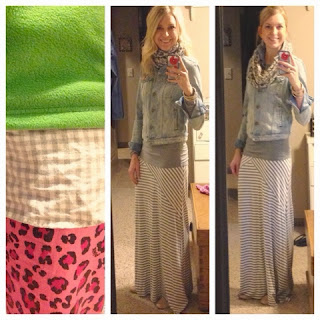 Then there was this good word at church…reminded about being intentional, just doing something every day. I don’t need to be monumental, Jesus has that covered.  I need to be incremental. Advocate, seek opportunities…every day.  The fruit of the Spirit; the character of Christ to the world. Despite the overwhelmed schedule, the grades, the pesky cold, the tired, the stolen…those things are not new, they are not unknown to Jesus. They will pass and a new day dawns, a new week begins, the calendar lets go of January for the fresh pages of February.  I just need to look at each day and do something that day. That matters. 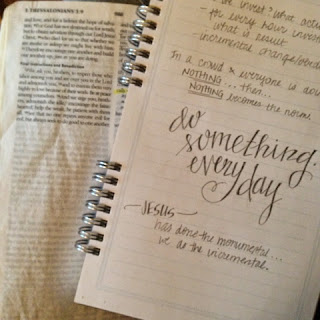 I took a nap and laid on my couch for the entirety of the Super Bowl evening, only getting up to walk my dog and checked my mail. This note from my Dad was in my mail…snail mail cards and notes are my love language…it was just like a sweet reminder from my Heavenly Father….have a good day. 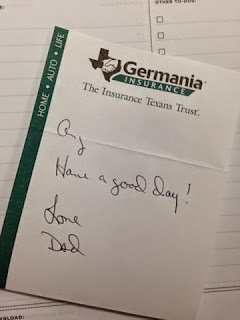